Watch a glimpse of the 2014 GIAMA Awards in the official trailer below.

30 days to Atlanta (currently showing in Cinemas), Iyori, A mile from Home, and Apaye won big in Houston, Texas at the glamorous 3rd Annual GIAMA Awards hosted by ace comedian Julius Agwu. It was a night full of excitement and celebration of African films at its best. Just as Nollywood foremost director/actor Desmond Elliot said in a previous interview that his first attendance at the GIAMA was like being at the Oscar’s, so also were James Costello words as he got on stage to present an award at the 2014 GIAMA. Costello, a renowned DOP who migrated from Hollywood said “this is like being at the Oscars a little bit”. Overall, the GIAMA has been widely depicted and portrayed in this manner since its inception not only by Elliot and Costello but also by several attendees including celebrities and special guests at large.

This memorable, historic and exciting night of recognition of the best in the African entertainment industry was kicked off by a special opening rendition by MYOA and Jerry Cleo, which was followed by a grand entrance of the “Julius Agwu” who continually kept the audience entertained with his rib cracking jokes and comedic acts. Another rendition by the best of USA Africa – Victor Ndukwe, MYOA, Jerry Cleo and Pascal PC that aroused a lot of emotions in the audience was the touching media presentation on “Ebola in Africa”, which was announced with a powerful introductory speech by Uti Nwachukwu. And finally, the main highlight of the day was the fantastic and mind-blowing performance by CEO Dancers, the UK-based entertainers and British Got Talent” semi-finalist that set the stage on fire and left the audience in awe at the dexterity of their rhythmic dancing skills. 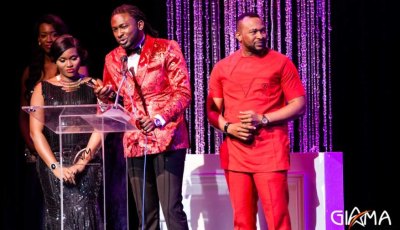